This homepage contains the latest version of the webbook as a work in progress, incorporating edits more recent than the Princeton University Press 2008 printed edition, as well as comments by other colleagues and friends.

Please use the stable, hyperlinked version of the manuscript whenever you want to refer to a particular part of the text, and send comments, corrections, etc., to dasgroup snail mail.gatech.edu, note the number of the version that you are reading.


xfig source for all birdtracks 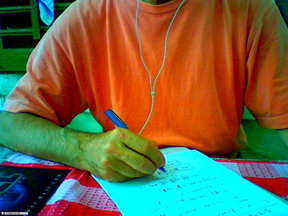 I think there is a mistake in section 11.7, where you are speaking about SO(n). You conclude that there are "chiral" irreps for SO(n) for n-odd. Not so. For n=2m+1, (the B_m series,) there is only one simple spinor irrep, which has dimension 2^m, and it is self-conjugate. The ones with handedness are for even n=2m (the D_m series), which breaks up into two inequivalent irreps of dimension 2^{m-1}. For m even, m=2k or n=4k, they are self-conjugate although inequivalent. For m-odd (m=2k+1 or n=4k+2), the two irreps are complex and conjugate to each other, e.g., the 16 and 16-bar of SO(10).

Suppose for SO(10), I have a complex scalar \phi in the 126 irrep. In how many inequivalent ways can 126^4 form a singlet? (I am not including the 126-bar, which is a somewhat easier problem.) I haven't found this non-supersymmetric potential in the literature.

Using a Mathematica module called LieART, I find that there are 3 different ways to do this, but one is antisymmetric under exchange of two fields and ruled out for a single 126-boson. The other two are symmetric under exchange of any two 126's, but I wanted to use chickentracks to check that this Mathematica routine gets it right. (In fact, the code assumes that the different irreps are not identical, i.e., it is as if each field had a different flavor, so it isn't obvious which are inequivalent for identical fields.)

My student says there an error on the top line of Table 7.2 on page 68? The diagram is the adjoint “box” for su(n) - there should be a factor of n in front of the first term.

If I calculate the adjoint quadratic Casimir CA = 2n (choosing the normalization of the generators such that a = 1) then I can generate the same bubble graph by contracting two quadratic Casimirs or by (adjointly) tracing the (adjoint) box. The first gives me 4n2N and the latter 2?n(N/n)2 + 2(2N + N2) where ?=1 from your table or ?=n from his program, and of course N = n2-1. These two seem agree only for ?=n.

Small corrections, of interest only for editing purposes.

editing instructions (of no interest to readers of the book)